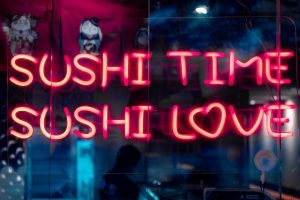 On the subject of food, sushi is one dish that famously identifies Japan and is regarded as an art. While it may look easy to prepare, skill and artistry goes into making great sushi. Hence, sushi chefs and masters have trained long and well to perfect the art of sushi, from selecting the freshest of fresh ingredients, the proper process and timing in putting the dish together to serving the dish.

Today, sushi has become a  common dish in several countries, found in both restaurants and grocery stores. Although now popular worldwide, many still associate sushi to raw fish because of the fact that the dish can be made with raw fish. However, many types of fish, raw or cooked, as well as other seafoods are used in preparing sushi.

“Sushi” in Japanese means “it’s sour.” This gives a picture of the origins of sushi being preserved using salt. Sushi would then refer to the specially cooked and prepared rice used to make the dish. Basically, the rice is cooked with vinegar.  To make sushi, it can include different types of fish, either raw or cooked, or other types of seafood, and some vegetables. Wasabi, soy sauce, and pickled ginger are the usual side garnishes that go together with sushi.

Sushi Sushi, an NYC-based sushi restaurant, has briefly described on their website, sushisushi.com, the most famous types of sushi –  https://sushisushi.com/types-of-sushi/. It is understandable that with sushi becoming mainstream, different versions of modern sushi were created over the years. So, the kind of sushi that we are familiar with today differs from how it was first originally created. Today, it is quite evident that sushi has become a kind of fast food.

If you do your research, you would be amazed at how many kinds of sushi and sushi rolls there are today. You may have encountered several of them listed on restaurant menus. If you have no knowledge of the basics of sushi, it will of course be difficult for you to understand or identify on the menu which sushi is which. That said, here are some basics about sushi. 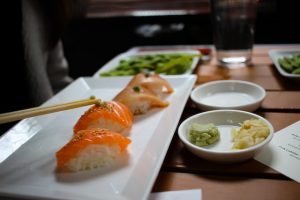 The most popular as well as the most basic form of Japan’s sushi. It is a slice of raw fish placed as topping on a balled vinegared rice. While raw fish is traditionally used, tamago (rolled omelet) seared or cooked fish or meats and vegetables can be an alternative. This type of sushi, in Japan, is turned upside down and the fish topping, instead of the rice, is dunked in soy sauce.

Also known as sushi roll, nori (dried seaweed) is the most common component of maki-type sushi dishes. It serves as a wrapper to hold and contain the rice and other ingredients. When rolled, the filling of maki is usually in the middle and the nori with the vinegared rice is outside. In Japan, sushi rolls are very basic and range from natoo (fermented soybeans) to cucumbers.

At times labeled as “battleship,” this type of sushi is a fusion of nigiri and maki. A filling that is less-solid is topped on the rice ball and secured by using the nori to wrap the outside. This forms a ship-shaped rice bottom, holding the filling.

To know more about contemporary sushi, do check out https://sushisushi.com/types-of-sushi/.